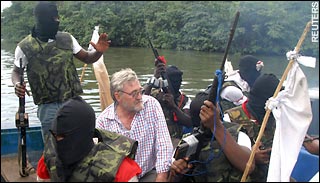 A United Kingdom-trained Criminologist and Chairman of Puma Eye Security Services, Mr.Pedro Ayandokun, urged the government to be prepared for the worst security senario, saying ” the rate of kidnapping in Bayelsa State might increase before the election and after.”
He said, “There might not be violence in Bayelsa because there is a state of anxiety, which may keep people indoors and make them fearful to go out to vote. But it does not mean that the government should not prepare for any eventualities because tension is high in the state now. The rate of the kidnappinig is on the increase.”
Recently, the Movement for the Emancipation of the Niger Delta said it was mobilising 500 of its members to monitor the upcoming election in Bayelsa, a move that Ayandokun described as capable of threatening the election.
“Goverment should not allow MEND to send observer there since tension is very high,” he said.
“It should know how to tackle the terrain, deal with kidnapping and hit and run attacks because the people would cause the trouble would know the terrain very well. So if they commit a crime and get in the water, government must be prepared for it. It should send marine police to the state ahead of the election.”

Prepared for the worst Security Senario